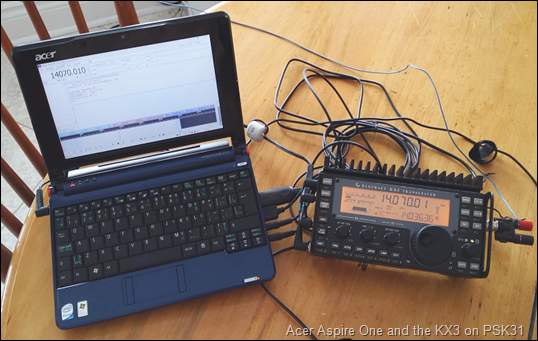 I began using digital way back in 1999 with my now vintage FT100. Those early days of digital were experiments in the infancy of PSK31 and other modes available on the early beta programs at the time. It sure has changed. In 2004 I was on the beta test team for Ham Radio Deluxe testing and reporting bugs back to Simon Brown in Switzerland. HRD is now in the hands of a commercial company and it gets better with every new release. Yesterday I hooked up my KX3 to an Acer Aspire One. The Acer is a small portable laptop that sports 1GB of ram and a 160GB hard drive. When new it ran WinXP and last week I upgraded it to Win10 Home. I installed FLDIGI and it all ran just fine and used about 650mb of ram - so there was still some unused memory. It all ran just fine and made a contact with Mary, KC4TIE in Kentucky. She gave me a 599 report. I was running a 12 foot wire antenna and the internal tuner of the KX3 tuned it up on 20m with no effort. I was operating portable at the kitchen table with the power set to 3 watts. This will be my new portable setup for digital modes now. Next on the list is installing some JT65 software to see how this minimalist setup works decoding real weak signals.

Is that a random wire antenna I see attached?

Just one hint, from specifications point of view JT65 is the mode that is not guaranteed with KX3 due to the warming up of the DSP...in the end that leads to instability of frequency mainly if used on 2m. I would be curious of experiences from others as well. 73 de Thomas, DL1LPZ

Thomas, I did the temperature compensation on my KX3, following instructions from Elecraft's engineers and designers. So far no instability with PSK digital modes and using JT65 on another desktop computer I had eliminated drift using the temperature compensating routine. Before doing the compensation there was a noticeable amount of frequency drift. Also I added a substantial heat sink to the top of the KX3 which keeps the radio nice and cool during extended transmit times.